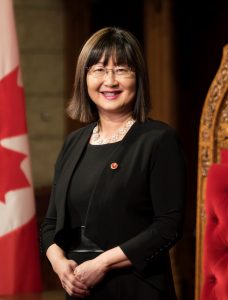 The Honourable Yonah Martin is a Conservative Senator of British Columbia, appointed by The Right Honourable Stephen Harper in 2009. She is the first Parliamentarian of Korean descent in Canadian history. Currently, she is the Deputy Leader of the Opposition in the Senate (since 2015); and previously served as Deputy Leader of the Government (2013-2015) She is also Co-Chair of Canada Korea Interparliamentary Friendship Group (since 2009), founding Co-Chair of Canada Bulgaria (since 2014); and active on a number of other bilateral and multilateral groups. In 2013, her Senate Public Bill (S-213) received Royal Assent to designate July 27 annually as “Korean War Veterans Day” in Canada. Passionate about mentoring youth and young adults, she established a Parliamentary Internship and Mentoring Program (since 2011); she also supports various youth and young adult initiatives, and speaks to students in schools and forums across the country. Born in Seoul, Korea, Yonah Martin immigrated to Canada in 1972, and has resided in Metro-Vancouver ever since. She has earned a BEd’ 87 and a MEd’ 96, and had a 21-year teaching career (1987-2008) until her appointment to the Senate in 2009. She has been married to Doug Martin for almost 30 years, and they are proud parents of a daughter, Kiana Mi-Sun, who is also a graduate of UBC, BSc’ 17.

What is your most memorable experience from your time in the Faculty of Education at UBC?

I have many wonderful memories of all the hands-on experiences in my courses and practicums. What I recall distinctly was feeling as though I was a fish out of water returning “home” when I first began my Education degree (in my second year) having spent a very long first year in the Faculty of Sciences.

Back to: News Releases
Close
What are you looking for?